RSS
← Stuff like this makes it all worthwhile…..
Tooting our horn a bit! → 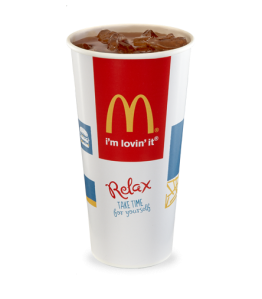 Okay, so I know that this blog is supposed to be about parenting, and raising daughters, and being a good Daddy and all, but from time to time, I like to take a brief  side road and talk about other stuff. (Plus, my attention span is shorter than the average tsetse fly’s so I need to come up for air every so often.

So, suffice it to say, I have a few  ummmm “interesting” stories to tell, and like I always say, I try to keep it real, so every story I tell is true.  I mean REALLY…who would make up stuff like THIS?!?!? :

So, during my time in the Air Force, there was a period  when I was  temporarily stationed in San Angelo Texas.    My home was still in Clovis, New Mexico, so on some weekends, I would drive back home to spend the weekend with Sharon.    This was before we adopted  the girls.

On one occasion, I was just starting my drive back to San Angelo, when I stopped at a McDonald’s at some small town to grab a bite to eat. ( I THINK it was Muleshoe, Texas).  Anyway, I went through the drive through (which I have since developed a phobia about, btw…DON’T JUDGE ME!), got my burger, fries, apple pie and large tea, and was on the road again.

So, I drove on for a while.  Now, I’m not sure if you know about some of the rural Texas landscape or not, but when you drive across Texas, there’s a distinct possibility that you will be confronted by EXTRAORDINARILY  L-O-N-G stretches of nothing but road…like….ALIEN ABDUCTION type roads.  Like…..TUMBLEWEEDS ARE REAL type roads.  And in the year 1993 PGP (that’s Pre GPS) you could even be lost and not know that you’re  lost for HOURS!  No joke.  And you better PRAY that you don’t break down.

Anyway, so here I am, driving across Texas,  in the middle of GetNowhere and Fast.  I take a slurp at the straw in my tea, and it makes the dreaded “ain’t no more in here, ya big dummy” sound.  So, I decide to pull the lid off and drink the last little bit of liquid straight from the bottom of the cup….and that, dear friend, is when it happened.

I lift the up, proceed to drink, and a big old piece of ice proceeds to get wedged in my windpipe.  (SO NOW I SWERVE.)  Now, I never claim to that I think the same way a NORMAL person would, because my FIRST thoughts were, “Dang…..I’m going to freaking suffocate because a piece of ice got wedged in my windpipe. This is going to be the DUMBEST crime scene, EVER…’cause when it melts, there won’t be any evidence.  Can you imagine the crime scene investigator or the coroner saying ” Who the heck suffocates……on AIR?!?!?  ”

Yeah…that is really what I thought.  The potential of DYING wasn’t scaring me…but the thought of dying AND looking dumber than a box of rocks gave me the willies.

Somewhere in the midst of all of this tomfoolery, I pull the car over to the side of the road. My mind kept racing at 120 mph though.   Now for the sake of not having any of you look at me like I should have on a helmet and straitjacket  when you next see me, I need to present a bit of a note here.  I’m NOT saying that all of these lines of thought are the norm for me, in fact, I’m more likely to say that it was my perceived proximity proximity to my  imminent  DEATH that made me think outside the box.  (Yeah….that works.)

Ok, so the BEST CASE SCENARIO I could hope for at that point was the examining coroner would  determine that I drowned because of the water and tea in my stomach…  (which…in retrospect…wouldn’t have made me look like the sharpest tool in the shed either.)   That thought was almost immediately followed up with “If I can make the internal heat in my body higher, I can melt the ice  faster and well, live!”

Increasing my body temp, huh?  Sounds reasonable.  (NOT) So….how did I think I could do it?  Why, it’s kinda like trying to blow air outta your ear. (OBVIOUSLY…LOL)  You tighten your stomach up as much as you can, and push….simple.  (Try it…you’ll either your face will feel hotter, you’ll pass out, or be left with a BANGING headache ….POSSIBLY, all three.)

So…..here I am, pulled over on the side of the road in the middle of NOWEHERESVILLE, Texas, with a big old piece of McDonald’s ice wedged in my throat,  unable to breath, eyes bulging, trying to increase my body temperature like the monks in the old karate movies so I wouldn’t die and have the headline read “Traveler from New Mexico Chokes on Texas Air”.

(next post we will get back to the normal stuff)

Posted by Ty McDuffie on April 23, 2013 in Uncategorized

← Stuff like this makes it all worthwhile…..
Tooting our horn a bit! →